Early ‘racist’ marketing of makeup toward women of color – 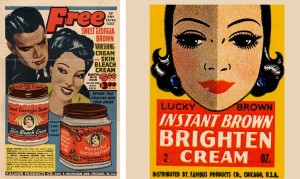 The Motown movement of the 1960s and later the blaxploitation film genre of the 1970s helped cement a new beauty image of African American women, that was a far cry from the racist attitudes of early cosmetics manufacturers. 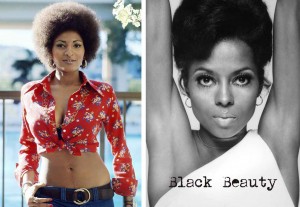 The all girl bands of the 1960s and particular the ephemeral beauty of Diana Ross finally buried this attitude once and for all.
The actress Pam Grier, star of Foxy Brown, The Bird Cage and  Quentin Tarantino’s film Jackie Brown, perhaps more than any before her, became a symbol of black female power, sensuality and beauty. 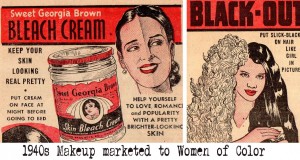 But makeup for women of color did not start in the 1970s. Going back as far as Madam Walker – a rags to riches girl, whose cosmetics firm Madam C. J. Walker Manufacturing Company, which sold beauty and hair products specifically for black women, made her a vast fortune, earning her the credit of being the first ever female self made millionaire -black or white, in America. 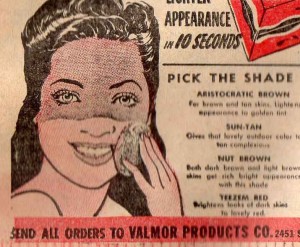 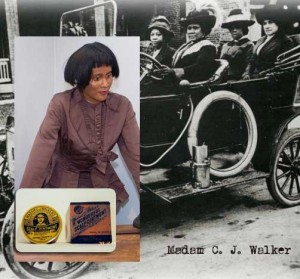 Many early cosmetic products for women of color held up the ‘white beauty’ ethos, and so were marketed to women who desired to reduce their ethnic appearance – hair straightening serums and face bleaches in particular. Black Betty Posters – a site set up to highlight the early racist attitudes to beauty idealism, points out that ‘America still classified people by skin tone, and blacks were no different from the white norm. The world was changing, but beauty ideals remained very conservative — and very European.’
The two dominating cosmetic companies of the 1930s and 1940s which ‘catered’ to black women were Valmor products and Famous Products, both owned by a Mortan Neumann, a Chicago chemist. His most popular cosmetic brands were Sweet Georgia Brown and Madame Jones.

Historian Wendy A. Woloson found an interesting beauty booklet, published by Valmor back in 1946.
Reading it and looking at the ads gives one the shivers. All the beauty adverts show rather ‘whitish’ women vigourously bleaching their skin and straightening their hair – the message being, to be beautiful, you ‘gotta be white girl’.

Patrice Yursik, the lovely Trinidadian writer and creator of Afrobella.com is a pretty good source for all things ‘brown’ as far as makeup is concerned. Highly recommended