– A peek inside the world of Besame Cosmetics –

– the vintage makeup line used in shows such as Mad Men and the 2013 film of The Great Gatsby.
Glamourdaze.com report for Vintage Makeup Guides. 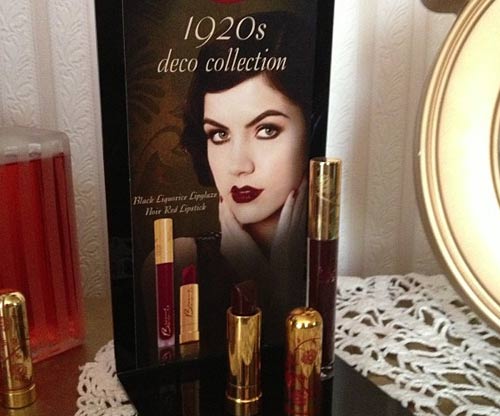 If ever a cosmetics store embodied the classic Hollywood era of the 1920, 1930s and 1940s, then Besame Cosmetics on West Magnolia Blvd in Burbank California is it. 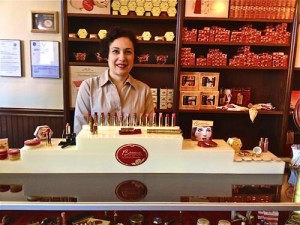 A trip to this store is a memorable on for the vintage makeup junkie. With reviews in many prestigious fashion and beauty magazines like Maire Claire and Vogue. Besame’s diminutive founder Gabriela Hernandez – described by Vogue ” in 1940s garb, from her leather soled Mary Janes to her dark hair pinned beneath a navy-blue chapeau”  says ” that a woman feels glamorous when dressed in 1940s clothes.” 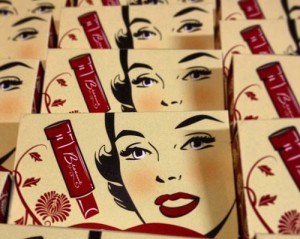 Her wardrobe is full of vintage suits -( Vogue -” The wool fabrics feel wonderful” ).
Her cosmetics are designed to enhance that feeling of glamour, with her crimson red lipsticks ( her most popular product), luxuriously packaged in evocative gold bullet cases. 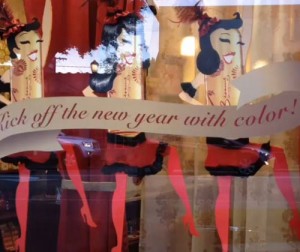 Deep pigmented lipsticks and rouges bring the wearer back to more glamorous times, which are more and more capturing the minds of women trapped in this modern era of Iphones.” Lipsticks were originally made from the same molds as those used for bullets”, says Gabriela, ” which makes sense considering that they’re a woman’s ‘secret’ weapon!” 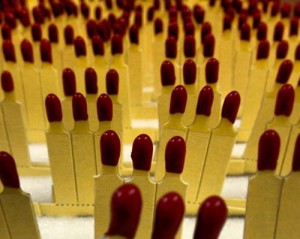 Last year they launched their 1920’s Deco collection, timed nicely with Besame Cosmetics appearances in the new Great Gatsby film. ” Noir Red lipstick is a concentrated, long-lasting black-red color modeled after the shades from the romantic 1920s era that made the dramatic Cupid’s bow lip. ” 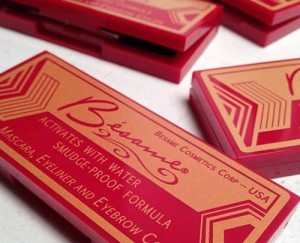 The newest addition to Bésame Cosmetics famous and classic era-style make-up line is its delectable, natural and mouthwatering 1930s cake Mascara. Gone is the wand and back comes the brush! “Bésame’s 1930s Mascara is a wonderful way to achieving the classic, elegant eye,” said Gabriela Hernandez. 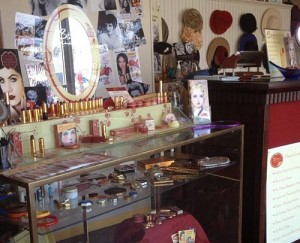 This February, if you’re lucky enough to be in California, Besame Cosmetics are holding a one hour makeup class – free, which covers basic lipstick history, manufacturing and application.
On Saturaday Feb 22nd at 11am and Sunday Feb 23rd at 11am. Ring (818) 558-1558 to reserve your seat.

Visit Besame Cosmetics to find a store near you otherwise!