Being first lady of the Metropolitan Opera, a successful recording artist and star alongside Bing Crosby in Going My Way  – Hollywood beautician Eddie Senz considers Risë Stevens to be one of America’s great beauties.

Eddie makes pretty faces for other stars, potential stars, models, and many everyday women who seek his expert advice. he says that Risë, by the magic of her eyes and mouth, speaks eloquently without uttering a word.

With Risë as model. Eddie showed us how to achieve more “talkative” eyes and lips.
” First, ” he says, ” pluck out scraggly brow hairs. Pluck from beneath, never from the top. Clean up area between brows, which should look naturally arched. if too thin, they look harsh and artificial. Center highest brow point above the outside edge of the iris of your eye. Using tiny brow brush, brush the brows up. With short, feather-like strokes, touch a brown pencil to hairs. This gives your brow hairs an extended look rather than having a pair of ‘ drawn on brows’ like so many women I see today.”

“Do not touch the skin,” Eddie commands, “unless your filling in an area where hairs are sparse. brow should be darkest at the center, fading towards the end. Now use black brow pencil. Then with brush tip, smooth upper brow hairs to a neat line”

“Apply mascara to upper lashes only. if brush is too moist, “beading” results. Hold lid up with one hand, while with the other you brush on mascara from side of brush in upward and outward strokes” 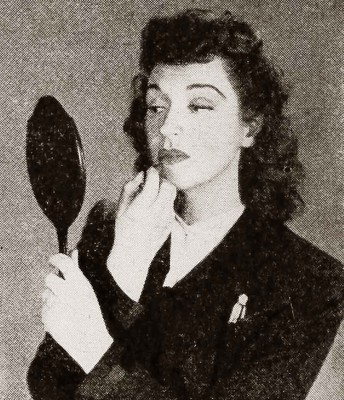 Eddie next showed us how lips should be made up to balance with the upper portion of the face. It’s part of his ” Face Spacing” method. He lips-ticked a smile on Risë’s pretty lips by making the upper one a wee bit shorter than the lower, so that the lower lip “cradled” the upper.

Related articles across the web