Make up and Go with 8 pencils – 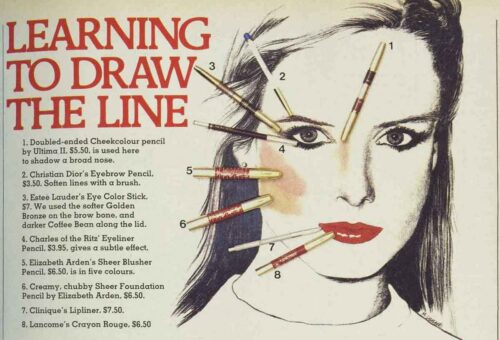 It’s 1978 and beauty makers are giving women more and more makeup pencils, to ‘draw’ their faces. They look smart, neat to carry, and they make putting on a face much more fun.

Some pencils have been around for a long time of course. The first was the simple eyebrow pencil. While smart women used it to outline their eyes, all the time they knew it was too hard, dragging on the skin.
So the next release in the early 1950s was a much softer brow and eye liner pencil, which was such a hit that for a time, lipstick took second place to the doe-eyed make-up look of the 1950s. Close behind came lip pencils.

But now Elizabeth Arden has surprised everyone and put foundation and blusher into pencils too. Pencils are great for women who love to touch up their makeup in the day but don’t want to carry round bottles of base and plastic eyebrow packs.
So an entire makeup can be done with just these eight pencils, as listed :

Have the following eight make-up pencils in your bag, and you’re good to go.
1. Doubled-edned Cheekcolour pencil – Ultima
This is used to shadow the nose
2.Christian Dior‘s Eyebrow pencil
This will soften lines with a brush
3. Esteè Lauder Eye color Stick
We used the softer golden bronze ( a very popular hue) on the brow bone,
and darker Coffee bean along the lid.
4.Charles of the Ritz‘ Eyeliner pencil.
This is for a great subtle effect on the lids.
5.Elizabeth Arden‘s Sheer Blusher Pencil.
What can we say about this marvellous tool. it comes in five
delicious colors
6.Creamy, chubby Sheer Foundation Pencil by Elizabeth Arden
7.Clinique’s Lipliner
8.Lancome Crayon Rouge